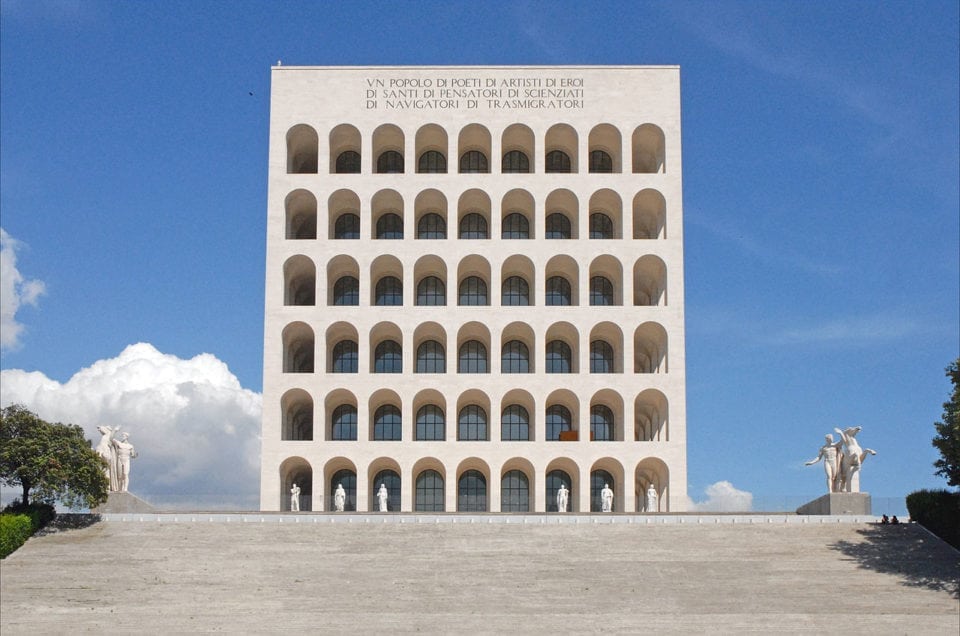 The Eur district, dotted with hotels, is in the south-east area of the City, near the Tiber River. The modern area is very famous for its “razional” architectures: the most famous example is the Palazzo della Civiltà Italiana or “Colosseo Quadrato”, that become the symbol par excellence of this architectural style.

The Eur, thought and built in occasion of the Universal Exhibition conceived to celebrate the twenty-year anniversary ( in 1942 ) of the Fascist’s March on Rome, hasn’t been completed during that age because of the Second World War, but subsequently: it has been completed in the end of fifties, in occasione of the XVII Olympics games.

In those years have been built the artificial lake, the Cycle Track and the Sport Palace. Europa ( this is the true name of the district ) changed its denomination many times: for example, originally it was called E42 ( that is Exhibition 1942 ), then changed in Eur ( Rome Universal Exhibition ), and Europa in the end.

In the area there are many interesting monuments and buildings, ( in addition to the “Colosseo Quadrato“, inspired by metaphysical art ), thaks to a particular road network and to the use of materials ( such as marble and travertine ) that aim to remind the Imperial Rome Buildings, such as: the Central Archives of the State, to Congress Palace, to PalaLottomatica, to Ninety Obelisk or to the Mushroom, ex water tank now panoramic restaurant.

Many hotels in Rome are in the Eur district, and they are suitable to host every kind of client, because of the peculiarity and the modernity of the quarter ( where besides have been made many films and music videos ): after what we said above, the quarter has the particularity to rise between the centre of the City and the beaches, and near to Fiumicino Airport, near to the New Fair of Rome and quite near to the industrialized area in the south of the eternal City.