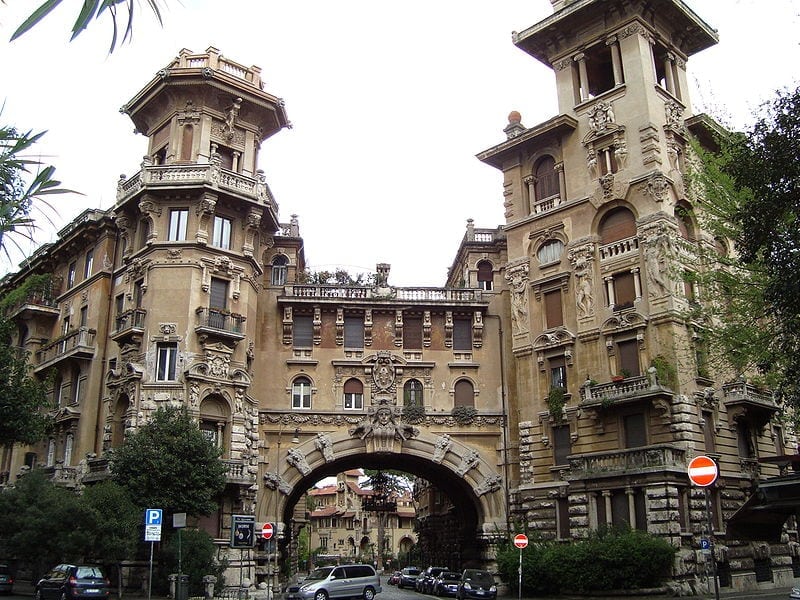 The Trieste district, the 17th of Rome, is included between Via Salaria, Viale Regina Margherita, Via Nomentana and the Aniene river. Amongst the districts bordering on, there are the one of Parioli, the Salario, the Nomentano, the Pinciano, Prati Fiscali and Monte Sacro. The district was Venne officialized in 1926.

The area has been inhabited since the primitive age, and later on the Sabino people created a small city ( its remains are still visible ); obviously Romans too colonised the area, that begun to be very frequented only when were settled the catacombs ( amongst them the famous and ancient Catacombe di Priscilla ).

The urban development of the following centuries, above all during the Renaissance and in the successive periods, was limited to a few noble villas and to rural houses.

After the Italy Unification, the area of Monte Antenne was walled because of its good position, and at its foot was founded the Tennis Club Parioli, that brings out many champions.

In the first years of thirties the area continued to be used for high quality residential buildings and many small buildings as Villa Lancellotti and Villa Chigi, destined to civil servants, and the Coppedé district, very particular in its liberty style; in those years also the Parco Nemorense (or Parco Virgiliano) was built.

In the seventies the district standed a further urbanization: in those year the awesome Piper was built, where performed also Pink Floyd and Beatles.

In the area there are many cultural and tourist attractions, that can be discovered if you stay in one of the hotels of the Trieste district: there are, in fact, many Catacombs ( as the one of Giordani, of Priscilla, of Sant’Ilaria, of Trasone, of Via Anapo ), churches ( as Santa Maria Addolorata, Sant’Agnese Fuori le Mura, Santa Maria Goretti, San Saturnino etc…) and monuments, as the Batteria Nomentana and the Sedia del Diavolo ( “Devil’s chair”).

The Nomentano quarter (the fifth in Rome, built together with other 14 in 1911) is placed near to the Mura Aureliane, and between the quarters Salario, Trieste, Tiburtino, Pietralata and the Castro Pretorio district. Built between the XIXth century and the beginning of the XXth one ( in that period, in the area was built also the Policlinico Umberto I ), the zone had a big development as a residential area during the Fascism and in the post-war period.

So the district, built for residential aims, suffered from the propagation of offices that little by little started to replace private houses; however, this has been forbidden by the urban development plan, also because of the opposition of the quarter inhabitants.

There are many places of tourist and religious interest to be visited in the district, staying in one of the hotels of the Nomentano in Rome, amongst them the monumental Palazzo delle Poste Italiane in Piazza Bologna, the religious complex of Sant’Ippolito, the Comando Generale della Guardia di Finanza Caserma Piave, the Accademia Germanica, the San Nicomede’s Catacombs, the Corpus Domini, the church of Santa Francesca Cabrini, the one of San Giuseppe and the one of Sant’Orsola.

there are also many villas to see, amongst them Villa Massimo, Villa Blanc and Villa Mirafiori, headquarter of the Facoltà di Filosofia e di Lingue dell’.

In the area lives many famous persons, such as actors, singers, writers, politics, doctors and Nobel Prize winners.

The Salario district, the forth of Rome, was ufficially instituted in 1921, together with other 14 districts. It is defined by other quarters ( Trieste, Nomentano, Pinciano ) and by the Sallustiano district. The quarter derives its name by the Via Salaria and it is the smallest of Rome, after its reduction because of the creation of the Savoia quarter (so-called at that times), now called Trieste quarter.

The Salario district, as is today configured, has a recent history: its urbanization, after Porta Pia, takes place thanks to the urban development plan in 1883, when many villas and palaces are built ( in the surroundings of Villa Torlonia ); amongs them, we would like to remind you: Villa Olgiati (completely destroied during the siege of 1849 ), Villa Borghese ( that belongs to the Pinciano quarter ), Villa Patrizi and Villa Bolognetti ( that has been removed to make room for the Protettorato di S. Giuseppe ).

Other urban development plans (1909, 1931 and 1957 ) complete the built area, saturating the vacating zones. Besides wonderful villas, a tourists who decides to stay in in one of the hotels of Salario quarter has the possibility to visit also the interesting churches of Santa Maria della Mercede and Sant’Adriano.